What Is Algorithmic Bot Trading

If you are a trader, you understand how time consuming watching charts for every market pair can be while trying your best to execute profitable trades at the right time. 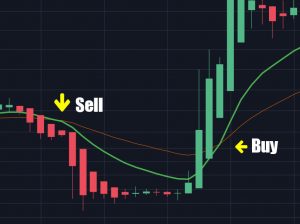 Lets say for example you are a newcomer to trading and you like to trade the 13 and 34 EMA’s. Meaning, when the 13 EMA moves over or under the 34 EMA, you are buying or selling. You can see an example of this in the image below. When the Green 13 Exponential Moving Average cross DOWN below the 34, that indicates a trend to the down side which is a Sell signal. When the Green 13 EMA crosses up over the 34 EMA, that is a buy signal. You will also notice that the price continued to rise after the cross upward. If you sold at the cross, you would miss those profits. A bot, like CrowTrader offers the ability to automatically find these trades, but also has a setting for Trailing Gains. Meaning, the bot wont exit the position until the price has risen to where you set the trail and then dips a tiny bit. 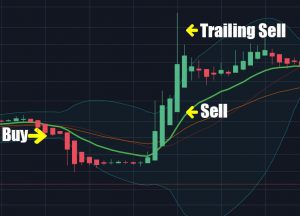 Another example would be trading using the Bollinger Band indicator as shown to the left. Here you will see the Bollinger Band Indicator. You will notice to Buy arrow indicating the price is at the lower end of the band and then a sell arrow once the price reaches the higher end of the band. Furthermore, you’ll notice a Trailing Sell which is to show you where you could earn greater profits if you trailer the price action above where you might typically sell using that indicator.

Overall, watching this price action, especially on higher time frame such as a 4 Hour candle means spending countless hours trying to figure out the best entry and exit points in any given trade. Now, imagine trying to do this across 35 different pairs at the same time, or more.

This is what algorithmic bot trading offers.

For example, CrowTrader will connect to your exchange account such as CoinBasePro where you will have Bitcoin, ETH or USD available to trade. You will then go into Backtesting, select your strategy such as Bollinger Band, your minimum buy amount, time frame etc and run. This will show you how well your strategy and settings would have performed in the previous period of time using a particular candle. Example would be a 1 Hour Candle over 7 days. You will see the profit you could have earned in that time frame. You can further tweak the settings to try and squeeze more potential profits.

Once finished, you can Start Papertrading which is the same as backtesting, but in real time. Once you’ve made some paper trades and can see the results moving forward, you can turn on Live Trading and actually begin using your real capital to start making gains automatically.

There are many different trading bots on the market, though some are more geared towards power traders while others are better for newcomers and veterans alike. 3Commas is a cloud based bot out of Russia that I personally found more difficult to setup and use than any bot I’ve previously used. Profit Trailer is a great bot if you’re technically sound and you want to monitor the market to adjust your settings on a very regular basis. CrowTrader is being developed to cater to the newcomers in the space who want to setup their bot and let it trade, easily and quickly without having to constantly monitor it and change every setting. It’s also very powerful, so even power users will find it an amazing tool for generating solid gains.